In 2018, Gus Van Sant (director of Good Will Hunting) added to his excellent directorial résumé with Don’t Worry, He Won’t Get Far On Foot. An under the radar biopic of late sketch artist John Callahan, the film examines his road to recovery as an alcoholic after a car accident leaves him as a quadriplegic.

From the beginning of the film, it’s evident that John Callahan (Joaquin Phoenix) has a drinking problem. If a bottle of liquor isn’t hidden inside his shirt pocket, it’s being guzzled behind closed doors. When the bottle is empty, John’s anxiety peaks and his social skills decline until he finds another bottle to drain. One night, on a particularly excessive binge, John meets a dangerous drinking partner named Dexter (Jack Black). Their intoxication doesn’t keep them from getting behind the wheel and their compromised decision leaves John in a hospital bed: bruised, hungover, and severely paralyzed.

In an instant, John becomes dependent on more than just alcohol. In addition to his motorized chair, which he operates with reckless abandon, he is dependent on others for all aspects of life. He’s bathed, pushed, and fed by others. Helpless, he wheels himself to an Alcoholics Anonymous meeting led by a zany leader named Donny (Jonah Hill). John’s new circle of misfits becomes his second hospital. Instead of doctors and nurses aiding in his body’s recovery, the broken and weary of AA perform open-soul surgery. Each question asked and every step endured function as a scalpel of healing to John’s hurting heart.

John’s new AA friends are perfectly cast with characters of every shade. Van Sant’s portrayal of this AA circle is often tender, sometimes comical, and always honest. Each alcoholic carries more than just the baggage of their booze addiction: opioid addiction, obesity, cancer, HIV AIDS, loneliness, ostracism. So naturally, John’s paralysis and the weight of childhood abandonment fits right in.

Don’t Worry isn’t the first film to tackle alcoholism. Actors like Denzel Washington, Jeff Bridges, Nick Nolte, and Bradley Cooper have all played alcoholics in stellar films over the last decade. In most of these films, the alcoholic’s struggle is framed within a grand narrative. The struggle to recovery happens in the context of a dramatic airplane crash investigation (Flight), music journey (Crazy Heart, A Star is Born), MMA championship (Warrior), or your run of the mill love story. And while John finds an outlet through drawing comics (eventually becoming a prolific sketch artist), Don’t Worry is the first film I’ve seen where the narrative towards recovery is primarily framed within a real circle of Alcoholics Anonymous. Coming from a family who has felt the ravages of alcoholism and the healing ramifications of AA, it’s refreshing to watch a film for everyday addicts. The film’s remedy for chronic alcoholism isn’t found in an intangible music career or a Hollywood love story, it’s specifically found in real circles gathered in church basements sharing pain over warm styrofoam cups filled with Folgers coffee.

It was delightfully jaw-dropping to hear Jonah Hill and Joaquin Phoenix dialogue about needing something outside of themselves to save them from their addiction. It’s hard to pin down exactly what John surrenders to as his salvation in the film. But a consistent presence of grace always follows in the form of his caretaker and lover Annu (Rooney Mara). Like any love story, the relationship develops throughout the film. But what makes Annu’s love for John so distinct is it’s consistency from the first time she sees him. Before their romantic relationship, she was his professional caretaker. Post-crash, Annu finds John in the hospital, his body held prostrate to the floor as the doctors tend to his incurable paralysis.

When Annu first enters the scene, the camera lingers on her stunning beauty, the sterile feel of the hospital dissipating with each second of her presence. With flowers in hand, she walks to John and condescends to the cold linoleum floor to maintain eye contact with the battered quadriplegic. She asks him questions, he smells her gifted roses, she gives him a massage. She provides, if only for a time, respite for an exhausted and broken man.

During a particular kind interaction with Annu, John shares that since his crash, two prayers have been on his tongue. The first he pleads to God, “God, please don’t let me be paralyzed.” 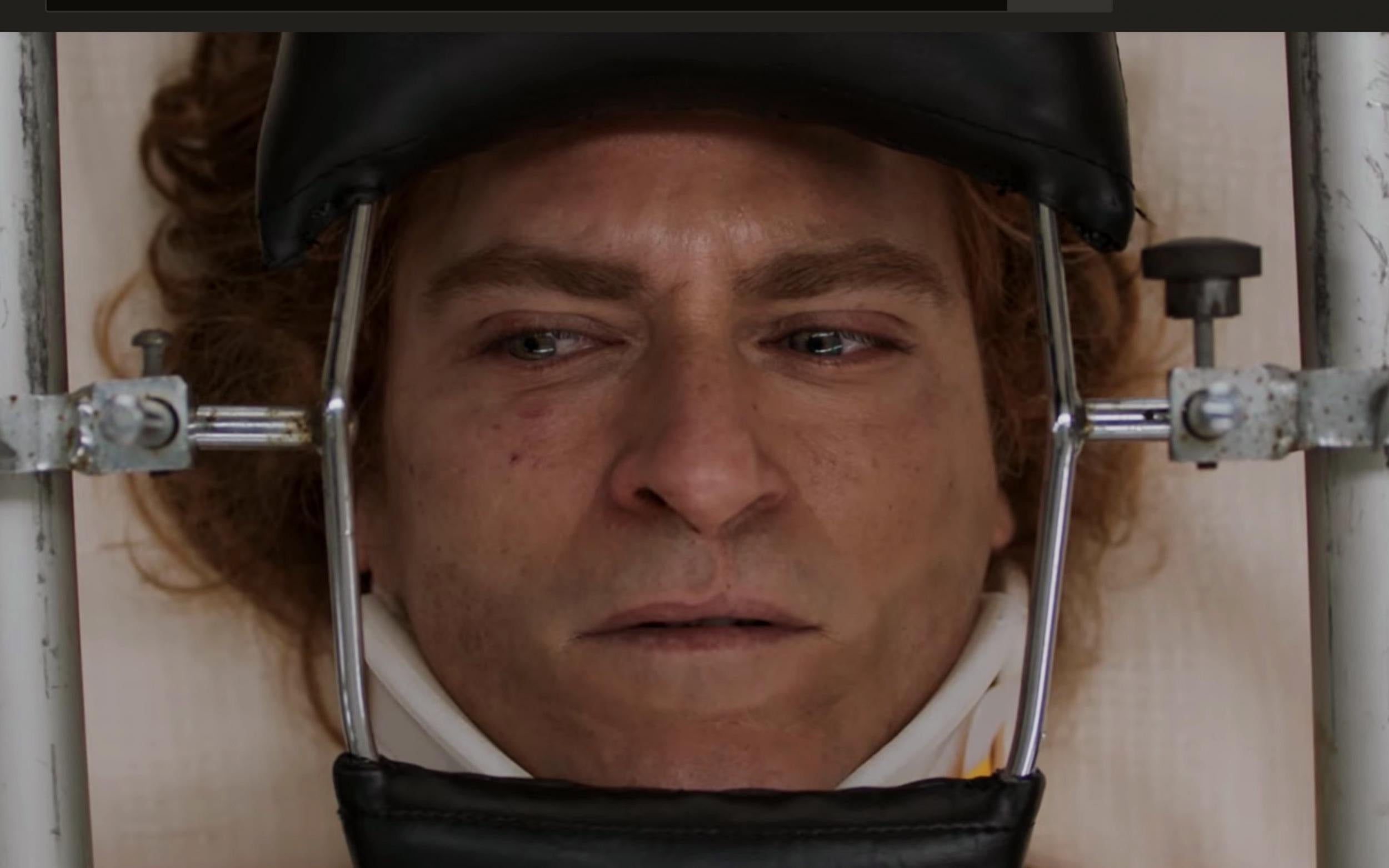 The second he offers to the devil. He prays in similar desperation, “I’ll do anything to not be paralyzed.” These prayers, though the same in resolution and word count, are the battlefield where all addicts wage war. We either pray to something or someone to remove the pain, or we bargain with our demons to keep us as agents in our own healing; a deadly deal we’ll never uphold and the devil is always too eager to make.

There is one character in John’s AA circle that’s silent in almost all of their meetings. Unlike the talkative and brash members of the group, this man just sits and listens. His presence in the group indicates that he is an alcoholic but his guardedness keeps audience from knowing what baggage he carries to and from meetings. Whether this character is fictionalized in Van Sant’s screenplay or was a real member of the group, I think that he’s placed there because the seat he occupies is representative of the addict in all of us. His seat is mine and it is yours; for those who drink from the destructive well of alcoholism, feed off the hollow praise of others, or find life’s meaning in dogged autonomy; trophying personal successes and self-discipline over care for our fellow neighbors.

The good news of AA, not dissimilar to the good news of the Gospel, is that help comes to us from outside of ourselves. As Chad Bird recently said, “lost sheep don’t bring themselves home; their shepherd does.” And like the nameless man in the circle of anonymous alcoholics, there are always reserved seats for us among our particular circles of brokenness. And if there is room in the circle for the helpless to pull up a chair, than there is most assuredly room in the heart of the helper. A helper who condescends to the cold floors of our vices, looks us in the eye, and calls us by our name. A shepherd who’s heaven-bent to bring us home.