I once heard the art critic and philosopher, Slavoj Zizek, say that he sometimes writes movie reviews without watching the entire movie. That takes a certain amount of chutzpah I do not have. I watched Blade Runner 2049 in a frigid and loud Egyptian movie theatre with expired 3D glasses that dimmed an already dark movie. So I saw it dimly, and I heard it overmuch, but I watched it all the way through to the end.

Blade Runner 2049 is Los Angeles noir set in the future in an environmentally-degraded, technologically-advanced, corporate-run dystopia. It is not a pleasant place to raise a child. A film-buff friend of mine informed me that the film, and it’s prequel, are meant to take place in the same universe as the Alien films, which further confirmed my opinion that the Blade Runner universe would be a lousy place to live. Frankly, the setting was at times too similar to Cairo, which can feel like a city in polluted mid-apocalypse, though without flying cars.

The movie opens with K, our android protagonist played by Ryan Gosling, visiting a worm farm to “retire” an aging rogue android. The conversation between K and the old android quickly devolves into wall-crushing violence, and just before the old android is summarily executed, he tells K “You’ve never seen a miracle.” This is startling religious language for a film that has filled its imagined landscapes with deep cynicism and smog. We expect miracles in the Prince of Egypt, and perhaps on 34th Street, but not in the cigarette smoke, leather trench coats, and acid rain of Blade Runner. However, this is the driving force of the film’s plot. K must find out what that old android meant by “a miracle.” In this detective story we are not looking for a murderer, we are looking for a miracle.

Under an ancient, dead tree on the worm farm, K discovers the remains of a female android who appeared to have given birth by C-section, a supposed impossibility. It takes on the sentiment of Auden: “Nothing can save us that is possible / We who must die demand a miracle.” This is the virgin birth of the film, an event that calls everything into question, that signifies something new under the dying sun. Up until this point, it was clear-cut that androids were not people. They could be used as slaves for labor, for sex, for war. They were pre-programmed to die young, servants of fate rather than free will. But if androids can reproduce, a biological line between the creators and the created has been crossed, and the rightness of android slavery comes starkly into question. It is an obvious allegory for our own historical chattel slavery system, propped up too long by theories of racial superiority. 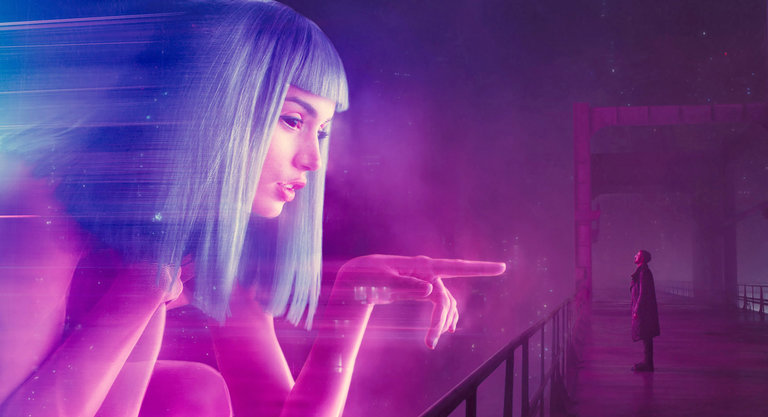 Blade Runner 2049 does not present a future where we have progressed past our age-old evils and prejudices. Evil has only been amplified. This is a world in which women are overtly presented as commodified products to be used, whether as flesh and blood android prostitutes or as holographic girlfriends, programmed to be personal cheerleaders and ego-props. (A notable exception is the police lieutenant, a woman of ruthless internal integrity and strength that does not back down in the face of violent and painful death.) This is a bleak vision of the future. It is a land populated by hookers and spies, scavengers and raiders, despots and slaves, but the focal point of the whole story is a miracle child. That last sentence could well describe the Old Testament.

But the New Testament thesis of the movie is presented by the female leader of the underground android resistance movement: “To sacrifice ourselves for a cause, isn’t that the most human thing we can do?” Sacrifice is what makes us human. Or put another way, our capacity for sacrifice is what reveals the image of God in us.

Of course, I think the film’s formulation of this idea misses some key points. Sacrificing for “a cause” is much too vague to be meaningful or moral. One could sacrifice themselves for jihad, for Christ, or for Coca-Cola, but they would not be equal sacrifices. And as author Shusako Endo so searingly portrays in his novel Silence, desire for martyrdom can become another form of pride. But on the whole, sacrifice demands that we surrender to something outside of ourselves, that we give up our basic self-centered, self-obsessed attempts at being gods unto ourselves.

K becomes preoccupied part-way through the film that he himself may be the missing miracle child. His memories, which are meant to be manufactured, keep proving to have a basis in reality. He recognizes things on his path that he should not be able to recognize, things only the miracle child should recognize. His holographic girlfriend encourages his new sense of meaning and grandiosity.

He goes looking for Deckard (Harrison Ford), the father of the miracle child, hoping to get a definitive answer about his own identity, but he receives no clear answer. He learns that there are duplicate records for the miracle child: one as a boy, one as a girl. Deckard himself doesn’t know the identity of the child. Then the corporate thugs show up, having been led to the hiding place by K’s somewhat naive search.

K is beaten within inches of his life and left for dead with his romantic ego-prop irrevocably destroyed. Deckard is kidnapped by the corporation. All seems lost. But out of this seeming death comes life. K is rescued by the android version of the underground railroad, and they tell him the truth. He is not special. He is not the miracle child. He must make his life meaningful some other way. They assign him to kill Deckard in order to prevent any information getting to the evil corporation.

Instead, K takes on the New Testament theme presented by the resistance movement, sacrificing himself for the life of Deckard, falsifying Deckard’s death, and re-uniting Deckard with his long-lost daughter. K is able to deduce that if his miracle-child memories do not make him the miracle-child, then the dream creator must be the true miracle-child. He had met her earlier in his search, a young woman with a supposedly compromised immune system who lives in a bubble dreaming up memories to provide personalities for androids such as himself. K becomes like the android farmer he killed at the beginning of the film, willing to die for a miracle, willing to give his life so that another man may live.

And K does die, bleeding out quietly from a stab wound on snow-covered steps as Deckard goes to meet his daughter for the first time.

I have heard it said that on the cross, Jesus is most fully God, and that in the resurrection he is most fully human. This seemed like an error to me at first.  A polyglot monk had to explain to me that the cross is God’s love carried to its ultimate logical conclusion, and that the resurrected Christ is what a real human looks like, a New Adam. In sacrificing himself, K acts like God, and in acting like God, he becomes truly human. That is a miracle too, though an incomplete one without resurrection.